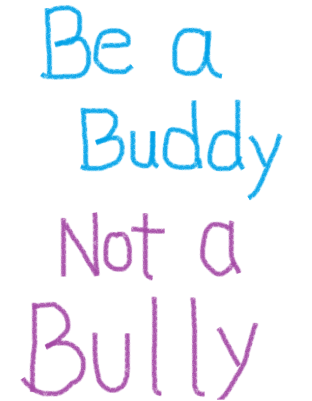 I started Be A Buddy-Not A bully because I was being bullied in the 3rd grade for how I dressed and a few other things.  I went to some of my teachers and administration and I was told that I was being a tattle tale, and that I needed to learn the difference between being bullied and girl drama.  I felt alone, and like I had no one I could turn to.  I went home to my parents, and told them I was scared and didn’t know what else to do, because nobody would help me.  My parents talked to me and told me the best thing I could do, was stand up for myself.  If I stood up for myself and let them know I was not going to put up with their bulling, they would stop.  I did just that, and after a little while the bullying did stop.

The following year, when I was in 4th grade, there was a kid in my class that had Autism.  He was being bullied and picked on because he was different.  This made me mad, and really bothered me.  Why pick on him, because he was different? I began asking “why do we do this to people?  Why is it so cool to be so mean to other people?”   Again, I would go home and tell my parents how it made me feel and they told me that I needed to remember how I felt when I was being bullied and understand that maybe he doesn’t understand what is happening, or maybe he doesn’t know what to do to stop it.  I decided I was going to stand up for him and tell everyone to leave him alone.  It didn’t happen over-night but eventually, after everyone realized I was going to be there to stop them, their bullying turned into genuine approval of him. He was being included in things like lunch, and people were talking to him and not making fun of him.

It seemed simple to me, I saw the change that I made and thought that if I can do it then everybody can do it.  I spent hours on the computer and reading some books I had about building self-esteem.  I went to my parents with an armful of information about bullying and positive things you can say to people who are being bullied, and lots of statistic.  All I wanted to do was start a club in school, but I didn’t know how to because my school didn’t have clubs.  My parents told me if it meant that much to me, we would go talk to my principal.  Which is exactly what we did.

My principal at the time was very supportive of the idea and welcomed me to talk to the 3rd-5th graders at my school.

My idea is that if the 85% of students who are “by-standers” would STAND-UP and STEP-IN, then they can stop bullying.  I came up with the “Three C’s” which is Compassion, Confidence and 20 seconds of Courage…with these, kids are un-stoppable and they have the power to put an end to other people being bullied or even stop being bullied themselves.  I want kids to stop turning their heads, and start stepping in.  I understand that kids have more of an effect on each other than adults do.  We tend to follow the leader, do what is “cool”.  I think being nice, standing up for what you believe in and doing what is right is “cool” and I think if enough people stand up for who they really are, and aren’t afraid to be who they really are then we can change our environments completely.  Don’t let people know that you are afraid of them, or what they think.  Don’t let someone who wants control over you have it!  Find your 20 seconds of courage, your confidence and your compassion for others, and you will be amazed at the change you can make. It just takes one!

I have every student take a pledge to Be A Buddy – Not A Bully.  I ask them to make a commitment that they are no longer going to be a by-stander, they are going to Stand Up and Step in.  I make posters for every school, which every student signs.  Along with the pledge and the poster, every child is given a bracelet that says “Buddies Not Bullies.”  It serves as a visual reminder to the students that they have made a commitment to STAND UP AND STEP IN.

My goal, is to take my program to every school in Colorado and eventually every school, in every community around the Nation.